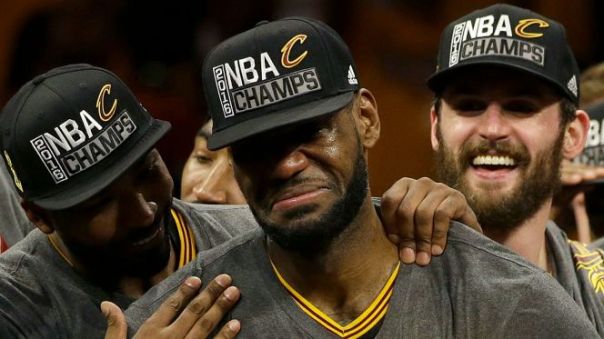 It’s official ladies and gentlemen of this nation: Political correctness has run amuck in this country thanks to people like LeBron James. I often pondered why out of all the celebrities or stars in Hollywood, why on earth did Hillary Clinton need people like LeBron James? Jay-Z? or Beyoncé? Sure she wanted to collect the so-called much needed “black vote” by assuring dual continent Negroes aka African-Americans, that she has their very best interest at heart (if you believe this then you’re nuts). Clinton selects these prized entertainers because when in doubt, she can always spout elements of victimhood and spout (more like pout) cries of racism (even though Clinton is on record praising friend & mentor former KKK member, Robert Byrd). Many black folks have been manipulated and bamboozled into thinking one political party i.e. the Democrats, actually cares about the well-being of the dual Negro and that the other party–the Republicans–are fully of overt racists (which to a degree I will concur) and any black person voting for or affiliated with the GOP is a sell-out (like Ben Carson).  Still, in the case of LeBron James and other athletes and entertainers of the sort who openly supported Clinton, maybe they was forced, coerced, or was a made an offer they can’t refuse?

In case you haven’t heard, the reigning NBA Finals champion James needed his “safe space” in front of reporters yesterday venting his disgust regarding comments made by Knicks President, Phil Jackson. The comment, in particular, had to do with Jackson’s use of the word ‘posse’ Jackson used to describe LeBron’s entourage during an interview with Jackie MacMullen of Espn:

“When LeBron was playing with the Heat, they went to Cleveland and he wanted to spend the night. They don’t do overnights. Teams just don’t. So now (coach Erik) Spoelstra has to text Riley and say, ‘What do I do in this situation?’ And Pat, who has iron-fist rules, answers, ‘You are on the plane, you are with this team.’ You can’t hold up the whole team because you and your mom and your posse want to spend an extra night in Cleveland…”

Not only did the word ‘posse’ infuriate James as he thought the word and Jackson’s comment had a significant racial overtone, it made LeBron’s friend and business partner, Maverick Carter, especially uneasy as he took it as a shot at African-Americans (dual Negroes):

“”I don’t care that he talks about LeBron,” Maverick Carter told ESPN.com. “He could say he’s not that good or the greatest in the world as a basketball player. I wouldn’t care. It’s the word ‘posse’ and the characterization I take offense to. If he would have said LeBron and his agent, LeBron and his business partners or LeBron and his friends, that’s one thing. Yet because you’re young and black, he can use that word. We’re grown men.”

While I understand Jackson probably was taking a small, cheap, gratuitous shot at the 4-time league MVP James; however, James must understand that as a African-American he has already won. This posse comment should only legitimize James as not only a walking ambassador being its preeminent face of the league, but a business model and a blueprint to future athletes who turn their ‘posse’s’ into more than just hanger-on’s, loan-leeches, and tear the club up buddies. LeBron’s “boy’s” have secured an economic future that will surpass the King’s playing days through various investments, deals, and projects through a promising multi-media production company. Not to mention, another one of his childhood friends and acute business partners, Rich Paul, runs a highly touted sports agency called Klucth Sports, which not only represents the “King” but also slew of other NBA talent including this year’s number one draft pick Ben Simmons.

All the hard work,effort and achievement and @PhilJackson11 still calls us a "posse"every step you take they remind you, you ghetto" @S_C_ pic.twitter.com/OPsPvAvFoM

Let me be clear I'm not saying @PhilJackson11 is racist,, I'm calling out his disrespectful language

Be that as it may, still, I disagree with LeBron’s over reaction to Phil Jackson’s remark and turning it into another plight that African-Americans have to struggle to overcome. Even though Maverick Carter voiced in a tweet that he wasn’t calling Jackson a “racist”, yet both Carter and James are implying race in their sentiments. Moreover, leave it to the progressive minions at Espn to make this into something incendiary or egregious towards James and black athletes in general, AND, you can only disagree with the posse remark if you’re white pundit because if you’re black pundit, you’re a sell-out. But I guess the LeBron’s, the Beyonce’s, the Jay-Z’s, the Mary J’s, of the world that endorsed Hillary Clinton, all of a sudden makes you ‘black’? Also, how much you wanna bet the same people who were upset with James just over a year ago about “your Highness” lack of support for or political involvement in the death of Tamir Rice, are the same one’s clamoring to his defense now? Utter nonsense I tell you.

LeBron, you and your team is winning; keep it up.