I was recently having a sincere conversation with the “Mother of all Civilization,” (just kidding) my very own mother as she wanted to share with me a word or message she kept receiving in her spirit. “Black people are on the verge of extinction,” she lamented in a brittle voice. It was as if she had read my mind or the very auspices of my heart. I find it often difficult to share such grief with anyone of related melanin in fear of coming off as a cantankerous pessimist, or your message being compared to the guy who just got saved and wants to share his religion like my name was Sharif; and you’re trying to reach Negroes like O-Dog and Caine. They don’t want to hear it because they rather live in this strong delusional state of what Taleeb Starkes would call “niggertivity.” The only time we’re actually awaken [briefly] from our stupor, is if we’re gunned down by white cops or are angered by any black who speaks critically of us who you call quote on quote, “Uncle Toms.” Does it mean I condone unarmed black people being gunned down by potential rouge cops? No. But even the media’s over-sensationalizing of the term “unarmed” has been nothing bait used to rattle our frail emotions to even further demonstrate that some black people are still gullible to slave-like pathology. We’re still under the impression that our local police departments are in our neighborhoods to serve and protect us when in reality they are only there to police us. This is why when you go into a predominantly all-white neighborhood suburb, YOU are quickly spotted and monitored by casual residents and so-called neighborhood watchmen a la the Zimmerman’s of the world (or the ones who are classified as white) and soon enough your presence is known on a cop’s radar under suspicious activity. The new Ferguson, or Cleveland, is doing the same song and dance with its historically favorite dance partner: The white liberal. After the riots and protests that erupted in Baltimore after the death of Freddie Gray, Cleveland has been selected to potentially participate in the “riot lottery,” where criminals become martyrs by way of police brutality; meanwhile agent provocateurs infiltrate these marches in lieu to destroying a section of the city all in the name of “No Justice, No Peace.”

As I and many others have already stated before, black lives really don’t matter to black folks unless that life is taken by the quote on quote enemy called “the white man.” The ear ticking doctrine of victimization brought to you white liberals, black apologists posing as intellectuals, and race hustlers has made many Negroes obsessed with the rhetoric of white supremacy while conveniently ignoring the sheer violence that permeates our city streets. For example, in the month of May alone, the city of Baltimore had 38 homicides according to a recent article published by Fox News’ Perry Chiaramonte. Since Mayor Stephanie Rawlings-Blake gave protesters carte blanche during the riots in April, local residents turned criminals have become embolden knowing the police are the last people to stand in their way.

“The criminals are taking advantage of the situation in Baltimore since the unrest,” Lt. Gene Ryan, President of the Fraternal Order of Police Lodge 3, which represents officers in Baltimore, said in a statement provided to FoxNews.com. “Criminals feel empowered now. There is no respect. Police are under siege in every quarter. They are more afraid of going to jail for doing their jobs properly than they are of getting shot on duty.”

As aforementioned above, the police’s main job in most of these modern urban cities of terror is to police you [us] however; if the police can’t perform they’re primary duty in neighborhoods filled with mothers like Toya Graham, who became mother of the year several months ago for “recusing” her son from participating in the Freddie Gray riots, the end result is more black on black crime equaling more black death. The mere mention of black crime is a big “no-no” in the black community not because of the actual tragic circumstances that stem from it; rather, it’s because other ethnicities—especially white people—do it too. They’ll tell you that whites commit crimes against whites and Asians commit crimes against other Asians etc. But I’m quick to tell them is that those other cultures don’t glorify, celebrate, or has a culture of violence aka “hood life” which is accompanied by rap lyrics that affirms them as being real niggas for committing such acts.

Speaking of rap lyrics and rappers, it seems to be a dangerously murderous trend for up in coming artist these days. Rappers Chinx and Young Pappi are the latest tragedies in a sub culture that has intoxicated the youth to embrace “savage life” through the popularity of “Drill Music” which many thought was a trend, has now become a staple in rap music no longer allowed to be bound to Chi-city. Unfortunately, it is this same city—Chicago—which continues to make headlines nearly every calendar holiday season due to its numerous shootings of the wounded and the deceased. This past Memorial Day, for example, Newsweek reported that at least 56 reported shot in Chicago’s violent Memorial Day Weekend. Bias is the African-American who can say their city is no different from any other city.

Black Death has engulfed and subjugated our so-called black community into a plague that could only be reminiscent of the European Plague. Reminiscent because our loyalty to the criminal and the debaucher, the violent and unruly, the elongated sickness that plague the heights of our community commonly called the ghetto. It is here were black elitist rises to the supremacy of blackness under the heel of white folk, but psychologically, above the minimalistic cognitive attention span of the average Negro. Black Death has become in its earliest infantry, nothing more than artistic letters and colorful life-like pictures or photos of individual people with sketches designed on t-shirts; to now trendy hashtags on Twitter, Facebook, and Instagram. This plague has contaminated what most pro-blacks call “Mother Earth,” but that’s after the descension or the facilitated and orchestrated fall of the black man. The roles in traditional marriage and relationships have been reversed. Through social programming which produces socialist, communist even fascists thought; the black woman through her early foremothers siding with Marxists, feminist, welfare policies and values—aided by the failure of black fathers—created the epic anarchy which exist in your local black community.

What must be understood when trying to deal with the complexity of black Americans, is the dealing with this mentality of “being a real nigga” which permeated our local inner cities. For instance, we used to have ‘models’ of reverence and consistency. We had women and men, who we looked to as status quo or people we could resonate with. However, because the seed of ‘big momma’ was implanted in us like a seed, we have grown to nothing but the black woman running the family with the black man’s role being socially marginalized; and his authority practically obsolete. In 2015, you have black women being indoctrinated by the likes of Beyoncé, Nicki Minaj, and others, spouting this “You don’t need a man,” (which is actually anti-man) for nothing, overly ambitious to the level where you actually want to be A MAN—but not it knowingly consciously.

There’s a prodigious issue with our black women because not only have they adopted the role of “provider” but they have become unofficial leaders which makes them unqualified affirmers when it comes to our children. Affirmation and character (truly) comes from a father who loves, disciplines and encourages their children. However, black women have eaten from the tree of forbidden fruit, and she has become a competitor—not a companion–to the black man, an adversary rather than an ally. Degrees, feminist theory, government assistance, child support, and minimal opulence have consumed the mind of those who dashiki-wearing Negroes render as “queens.”

As uncomfortable as white people are in discussing structural racism and white privilege; such is the same when discussing the contentious black crime argument with Negroes. Yes, contentious argument because many blacks will point to its oppressor due to the racism and systematic racial oppression. Just recently film director Spike Lee made a reference to black crime with CNN’s Anderson Cooper. One must speculate and ask are blacks upset with what Lee said, or is it because he said it on a public ‘white’ platform? The platform is often bastion of criticism due the inferiority factor and the left right paradigm in politics (politricks) where many blacks often prefer the canon of white liberal rhetoric of encapsulating hundreds of years of racism. Tavis Smiley used to hold a summit called State of the Black Union; where he enlisted notable African-American scholars, speakers, teachers, politicians and entertainers; to discuss black progress and sanctity or in other words, “what do we need to do next.” The Negro has yet to test this hypothesis of ‘what to do next’ because the next has falls squarely on the individual first; then the collective—without the assistance of white folk. So while intellectual misfits speak on the ills on slavery, Jim Crow, Black Codes, redlining, mass-incarceration through the prison-industrial complex, the War on Drugs, police supplying guns in poor neighborhoods, and on and on and on. The blame whitey card gets minimized when the name of Kendal Fenwick is echoed from a rotten grave. 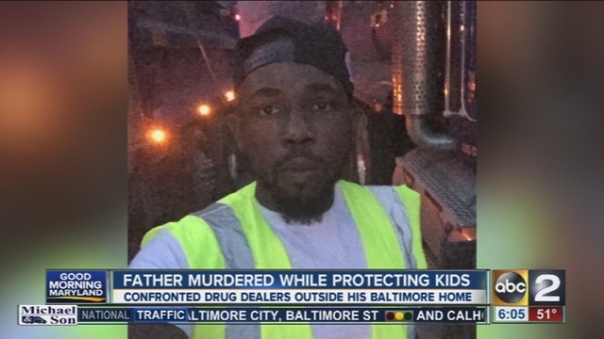 While many in black America rallied around a Missouri student who decided to starve himself because he and his peers felt they were ‘oppressed;’ the murder of Kendal Fenwick, gets swept under the rug. A known community activist, Fenwick died trying to protect his family of three; from the same ‘niggertivity’ most Negroes want to blame white folk for on a systematic premise. He was killed by drug dealers who were mad he built a fence to keep them away from him and his family. Brother Fenwick’s achievements and impact was reduced to a mere statistic as he became victim 295 of a 300 and counting murder rate this year in the city of Baltimore. I repeat; the same city that immortalized Freddie Gray as if he were Kendal Fenwick; is the same city that glorifies its petty hustlers. This nigga syndrome which has crippled the psychology of the American Negro mind; and has reproduced a legacy of excuses, victimization, self-hatred without self-actualization, from an oppressor whose shown his hand of supremacy by way of classicism; a weakened harnessed enemy who rather have a democratic liberal be its defense then going out on its own. Part two coming soon when I’ll deal with the new ‘Black Codes.’

Gringa of the Barrio

A Sassy Barrio Gringa Telling It Like It Is