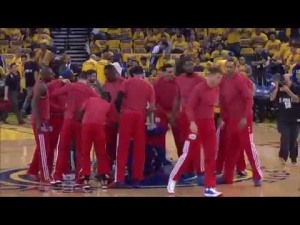 Black Americans have a chance to make history tonight. They have a chance to send to message not only to Donald Sterling, the NBA and its owners. They have a chance to make a social, political and historical STATEMENT to black people around the world. “White America, we DO MATTER.” We DO have not only an athletic skill, BUT A VOICE. I understand the NBA did what it was expected to do in disciplining Sterling. However, even if Sterling is banned from all things NBA, haven’t we seen a story like this before? From the Paula Dean’s and the Don Imus’s of the world? Sure they lose their jobs, sponsorship’s, even hold press conferences to express their apologies. We are used to seeing this time and time again. Everything will eventually go back to normal. The political race baiting pundits will continue to race bait. The NBA players and groups like the NAACP will receive little “trinkets” that will benefit certain minority programs and (sigh) America will no longer have to deal with its REAL problem: inherent white supremacy.

This is why it is important for these NBA players (really all of them) not to play tonight. They expect you to wear your black wrist bans, turn your jerseys inside out, you know, all the “safe things” because you’ll eventually play the game anyways. It will also break the stigma that’s placed on athletes who will HAVE A LOCK OUT ABOUT MONEY, but you can’t sit out for your self-respect? Just think of the transcending effect it will have on every single African-American, who can’t protest on their jobs because they’re the minority. Finally, on one of America’s biggest stages, The NBA Play-offs, during a time when the games have been very entertaining, PLAYERS CAN NOW SAY NO. My pride, dignity and self-respect is more important than your ratings, your awards AND YOUR CHAMPIONSHIP TROPHY. See, just because you, scratch that, THE NBA COMMISSIONER & COMPANY took care of Sterling you can best believe there are other owners who are apart of the “Good Boy’s Club.” Besides, who’s to say even if Sterling gives up his ownership he wouldn’t keep it in the FAMILY.
Black people always want to talk about the problems or accuse you if you stand up by saying, “What are you doing for your community etc..” Most of the times  black people never get into a place of power, and if we do, we end up selling out and becoming one of those “pet Negros.” These players are in a huge position during an observed Confederate Memorial Month, 50 years removed from the so-called Civil Rights Act, to HAVE THIS CURRENT AND FUTURE GENERATION TO NO LONGER HAVE TO SING, “WE SHALL OVERCOME.”
We don’t need the SHARPTON’S OR THE JACKSON’S OF THE WORLD, ESPECIALLY SINCE THEY WERE NEVER FOR US ANYWAY!! This will be independent from them because even they DON’T EXPECT BLACK PEOPLE TO DO NOTHING! Even if the NBA agreed to give the Sterling’s franchise over to Magic Johnson or another influential wealthy black. They would still win because it will only be a drop in the bucket to white supremacist America. Sort of like “Give the Nigger something and he’ll shut up.” NO! BY THEM NOT PLAYING TONIGHT WILL LET THE NBA KNOW, AND AMERICA, WE AS A WHOLE ARE NOT PLAYING WITH RACISM TODAY AND TOMORROW.
Lastly, if these players do not do this I will no longer patronize the NBA anymore. See, the fans can’t take the place of the players, so by them (THE FANS) not showing up for tonight’s game means nothing. Only the players can have a MONUMENTAL effect on the fans because they are the reason they SUPPORT THE LEAGUE!! Again, if these guys don’t SEIZE this moment not only will it be a slap in the face to former players like Jim Brown, Muhammad Ali, Kareem Abdul-Jabbar and others from yesteryear, it will prove black America stands for nothing because we have truly been bought with a price. And I’m not talking about what Apostle Paul said in Corinthians either. 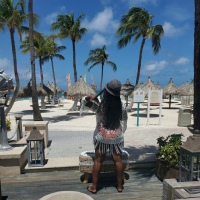